Help with any aspect of using the program that is not covered by the offical Help site at www.orphalesehelp.com.

some downloaded spreads give me a popup telling me to either download the deck the creator of the spread used, or edit the spread.

I have searched and clicked for hours, but I cannot find instructions for editing the spread to use my preferred deck. I can use some spreads and simply change the deck, but these particular spreads won't even load until I edit.

What am I missing?
Top

I gave up finding the 'edit spread' and instead downloaded the deck called for.

Now the program does not recognize that I have that deck.

Unfortunately, I still cannot use any of them, so I deleted them all. Strangely, a spread I entered works just fine.

I have to say, so far I'm unimpressed
Top

First of all it is hard to comment on the spreads you might download from the exchange because they will have been created using a variety of different versions of the program. Each time I modify the way the program handles spreads I try to make it backwards compatible, but it is quite possible that some of the spreads there have features that won't work in the latest version. If you could give me the name of a particular one that is giving you trouble I can take a look and see if there is anything the matter with it.

You found how to edit the spread to change the deck used but I will explain it here anyway in case it is useful to anyone else.

First of all, you try to load a spread and it says "This deck was created using the Foo deck which the program cannot find on your machine". When you are faced with this situation you have two choices. You can either try and find the Foo deck or you can edit the spread to use a different deck. Obviously finding the Foo deck is the best option because the spread was created with that deck in mind. Lets suppose you manage to find a copy of the Foo deck.

The first thing to say is that just because you have that deck somewhere in your collection, it does not mean that you will necessarily be able to use the spread straight away. This is because you might have saved the deck as Packs/Tarot Packs/D-G/Foo, or you might have saved it directly into your packs folder. The whole path is necessary to identify the deck (if it did happen to coincide with the path as it was on the computer of the person who created the spread then you could indeed start using the spread straight away).

The steps would be:

Open the main menu and go to Edit Spreads: 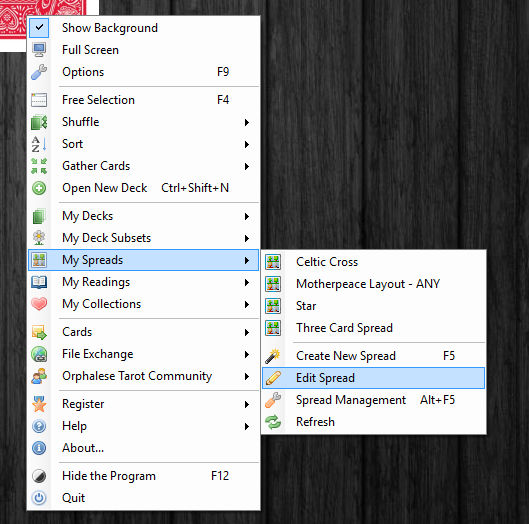 Select the spread you want to edit: 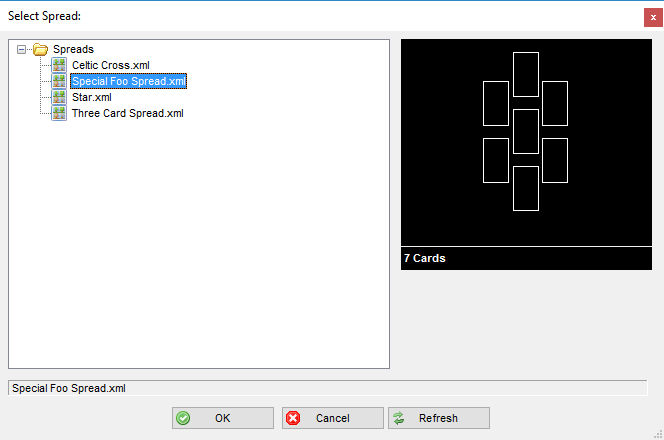 At the bottom left of the screen is where you can edit the decks that the spread uses: 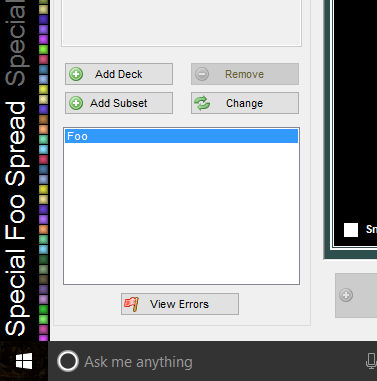 Press the button marked "Change" and then browse for where you saved your copy of the Foo deck.

Now we can browse to our version of the Foo deck: 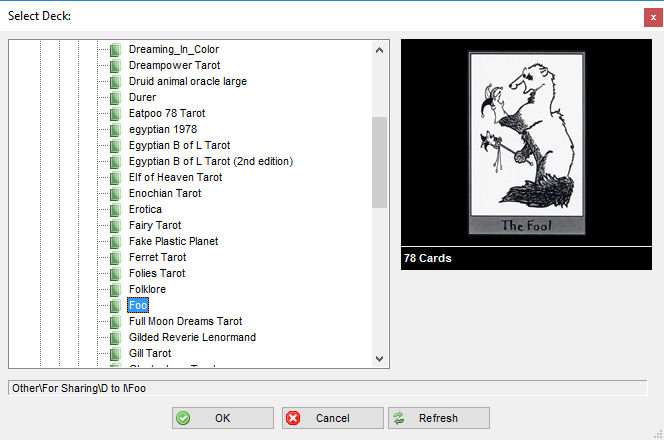 Having selected the deck you want the spread wizard shows the updated path: 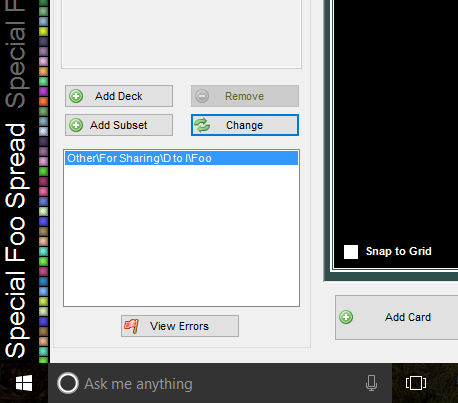 Now you would be able to to use the spread with the Foo deck as intended by the person who shared the spread.

In your last post you said that "Unfortunately, I still cannot use any of them, so I deleted them all", assuming you followed the steps above maybe you could give a bit more detail about why you couldn't use the spread, for example if there was an error message it always helps to have the exact wording of the message. As I said before, it may be there was an issue with the specific spreads you downloaded. If you let me know I will take a look.
Top

I've been helping this user through the Orphalesehelp email address and I think she has now solved the problem.

Return to “Help Using the Program”

Users browsing this forum: No registered users and 1 guest